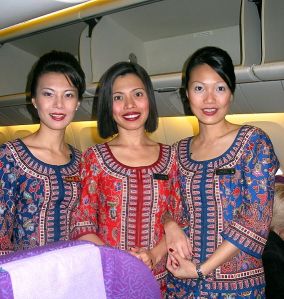 Flight attendants or cabin crew (also known as stewards/stewardesses or air hosts/hostesses) are members of an aircrew employed by airlines primarily to ensure the safety and comfort of passengers aboard commercial flights, on select business jet aircraft, and on some military aircraft.

The first female flight attendant was a 25-year-old registered nurse named Ellen Church. Hired by United Airlines in 1930, she also first envisioned nurses on aircraft. Other airlines followed suit, hiring nurses to serve as flight attendants, then called “stewardesses” or “air hostesses”, on most of their flights.

In the United States, the job was one of only a few in the 1930s to permit women, which led to large numbers of applicants for the few positions available. Two thousand women applied for just 43 positions offered by Transcontinental and Western Airlines in December 1935.

Female flight attendants rapidly replaced male ones, and by 1936, they had all but taken over the role. They were selected not only for their knowledge but also for their characteristics. A 1936 New York Times article described the requirements:

“The girls who qualify for hostesses must be petite; weight 100 to 118 pounds; height 5 feet to 5 feet 4 inches; age 20 to 26 years. Add to that the rigid physical examination each must undergo four times every year, and you are assured of the bloom that goes with perfect health.”

In the United States, they were required to be unmarried and were fired if they decided to get married. The requirement to be a registered nurse on an American airline was relaxed as more women were hired, and it disappeared almost entirely during World War II as many nurses enlisted in the armed forces.

In 1962, St Bona of Pisa, a 12th-century pilgrim, was canonised by Pope John XXIII as patron saint of air hostesses.
Source: http://bit.ly/rHPlC

Thomas Baker is the Past-President of TESOL Chile (2010-2011). He enjoys writing about a wide variety of topics. The source and inspiration for his writing comes from his family.
View all posts by profesorbaker →
This entry was posted in EFL and tagged air host, cabin crew, flight attendant, hostess. Bookmark the permalink.