Chileans Demand Change: Analysis of an Interview in English 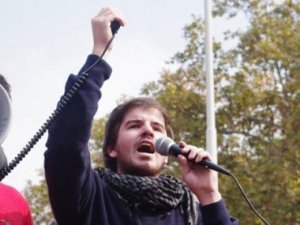 This post aims to give a global, generalized analysis of Giorgio Jackson speaking English. As a teacher of English as a Foreign Language in Chile, this provides me with some insights that may be useful for my practice.

Overall, Giorgio Jackson does a remarkable job of participating in an international interview (on Skype) using English as a communication tool. His performance can best be described as communicative.

He makes notable mistakes in grammar, vocabulary, pronunciation and fluency, but is able to complete the interview. Indeed, communication never breaks down.

How was he able to accomplish this?

Answer: He had some help from his interview partner(s).

1. Context: Both Giorgio and his interlocutor(s) have intimate knowledge of the topic. This shared knowledge aids understanding because the interlocutor knows what Giorgio means to say, even when Giorgio doesn’t say things accurately in terms of vocabulary or grammar, pronunciation or fluency.

2. Intent: This is real-world communication, and not a classroom. The intent of each speaker has priority. Giorgio wants the opportunity to speak to the world press, the media, to draw international attention to his cause. Likewise, the media wants to get the story.

3. Confidence: Giorgio is a leader with a message. If he can speak to the English-speaking world, he can tell his story, make his case on a global scale. As a leader, he has the confidence to do this.

To sum up, Giorgio would not receive top marks for his oral performance in this interview. There were simply too many notable deficiencies. However, his performance demonstrates what real-world communication is all about – the message. Meaning takes precedence over form.

What are the implications of this?

One implication is that you can expect tolerance for less-than-perfect English from people who are really interested in what you have to say. This information could go a long way towards giving the shy, less out-going student the courage to speak English…

Thomas Baker is the Past-President of TESOL Chile (2010-2011). He enjoys writing about a wide variety of topics. The source and inspiration for his writing comes from his family.
View all posts by profesorbaker →
This entry was posted in Education, EFL and tagged Confech, EFL, English, fluency, form, Giorgio Jackson, grammar, interview, meaning, media, pronunciation, Skype, vocabulary. Bookmark the permalink.