Univ. of Chile Researchers’ Surprising Conclusion: Success of Chile’s “Schools of Excellence” due to selection

Researchers at the University of Chile analyzed the academic trajectory of 28,000 students.

Over three thousand (3000) students applied last year for one of the seven hundred (700) seats in the Instituto National, one of the country’s most prestigious high schools, where most students achieve a place at university.

What is the recipe for success?

It attempted to clarify what researchers at the Center for Advanced Research in Education (CIAE), at the University of Chile, in the first research that analyzes whether Chilean “schools of excellence” generate added value, ie, if they are causing their students to achieve even more.

The work was unveiled at the Second Congress of Disciplinary Research in Education, organized by the CIAE and the Center for Policy and Practice in Education (Ceppe), UC.

These include the Instituto Nacional (of Santiago), Liceo 7, Carmela Carvajal and José Victorino Lastarria, of Providencia, and Abate Molina (of Talca), all schools with more than 280 points in the national test, Sistema de Medición de Calidad de la Educación, known by its initials as “SIMCE“.

The SIMCE is the National Assessment of learning outcomes of the Ministry of Education of Chile. Its main purpose is to help improve the quality and equity of education, reporting on the performance of students in different learning areas of the National Curriculum, and relating these performances with the school context and social learning.

SIMCE tests assess the achievement of the fundamental objectives and minimum compulsory contents (OF-CMO) current Curriculum Framework learning in different sectors, through a measurement that applies nationally, once a year, to students who enrolled in a given level of education.

Until 2005, the application of testing alternated between 4th grade, 8th grade and 10th grade. Beginning in 2006, annual evaluations are for 4th grade while 8th grade evaluation alternates with 10th grade.

In addition to the tests associated with the curriculum, the SIMCE also collects information about teachers, students and parents and guardians through context questionnaires. This information is used to contextualise and analyze the results of student SIMCE tests.

The background of their students were compared with those of twenty two thousand (22000) students who were their classmates in fourth grade, before entering the schools of excellence, the flagship schools (the majority of students leave in seventh grade).

We analyzed the result obtained in each 4th grade Simce of 2002 and in the second half of 2008.

In this last test, on average, students in schools of excellence outperformed their peers by 20 points in language (Spanish) and 29 in Mathematics.

However, the scenario changed after controlling for other factors, such as socioeconomic status of parents, academic skills and selection. The score difference in favor of schools of excellence Simce was reduced to three (3) points in Language and seven (/) in Mathematics, figures which are not significant.

The conclusion: the main mechanism that explains the best results of the schools of excellence students is selection, rather than teaching strategies, teaching and educational management.

Does that mean that students would have performed the same in another school?

These are students with high academic abilities.

In fourth grade, these students already had an advantage over their classmates, beating them by 24 points in the Simce Reading test and 27 in Math.

The researchers controlled for variables that typically explain performance differences, such as socioeconomic status of the parents. In other words, we simulated that if all children were equal, those who went later to the schools of excellence outperformed their peers in fourth grade.

However, that advantage increases later, the gap grows even further.

In the tenth grade, students in schools of excellence achieved 30 points higher in math and nearly 20 points on average in Language (Spanish) than their former teammates.

However, the better performance of these schools of excellence is due in large part to the large concentration of talented students in the same school, “says Juan Pablo Valenzuela.

The impact on the country

The results are consistent with international studies. In 2011, an American study found that high performance schools of excellence in Boston and New York was due to the practice of selecting the best students (known as “creaming” – choosing the best).

So Allende and Valenzuela point out that the policy of increasing the number of schools of excellence, as what happens with the Bicentennial Schools of Excellence, directly causes more segregation.

According to the scholars, students of schools left behind lose the benefit of having high ability students, (this benefit is known as the “peer effect”).

He mentions, for example, the Liceo de Puren, who had 84 applicants for 80 vacancies and moved up 71 points in the Simce.

“It is possible to improve results without selecting students. Training teachers on how to teach each subject, for example,” he says.

“Public education of excellence, on the same level as the Instituto Nacional School or Carmela Carvajal School, must continue to reach all regions. So next March inaugurate another 30 lyceums Bicentennial of Excellence, multiplying the opportunities for deserving children, “President Sebastian Pinera said in his message of 21 May. Today, this is a reality…

President Pinera led the inauguration of Liceo Bicentenario Mackay, located in the El Claro sector of Coyhaique, which has capacity for 540 students. The investment amounts to more than one thousand million Chilean pesos.

During the ceremony, recalled that nationally there are 60 Bicentennial Schools of Excellence, “the vast majority already functioning, some are going to start operations in March 2013 and we will allow each and every one of the regions of our country access to quality education, “pointing out that” in the Aysen region we have two Schools of Excellence: the Lyceum Heights Mackay here in Coyhaique, and also the Liceo San Jose Ur in Puerto Aysen.

And so, we’re trying to get quality education to every corner of our country, including an isolated region.”

In this context, the Head of State reaffirmed that “the effort we are doing as a society to provide quality education to all our children and all our youth is certainly a cause for which one must make a full effort, delivering the best of oneself. ”

Connectivism and Connected Knowledge: Participating in a MOOC [Kindle Edition]

Currently, there are two ways to find out what learning in a massive, open, online course is like: One, you can participate in such a course, provided you have the time necessary to invest in such a learning experience. When your time is the limited and precious commodity that we all know it to be, you may not be able to participate, however.

Don’t feel bad about that. That’s life, and for the majority of us mortals, we work for a living in a world that will not let us simply employ our time in any pursuit. We have to be selective, to be balanced with the way in which we invest our time. Families, friends, hobbies, rest & relaxation demand an equal share of the 24 hour clock. So, if we can’t participate in a MOOC, that leaves option two available.

Option Two? You can read this book…

Currently, there are two ways to find out what learning in a massive, open, online course is like: One, you can participate in such a course, provided you have the time necessary to invest in such a learning experience. When your time is the limited and precious commodity that we all know it to be, you may not be able to participate, however.

Don’t feel bad about that. That’s life, and for the majority of us mortals, we work for a living in a world that will not let us simply employ our time in any pursuit. We have to be selective, to be balanced with the way in which we invest our time. Families, friends, hobbies, rest & relaxation demand an equal share of the 24 hour clock. So, if we can’t participate in a MOOC, that leaves option two available.

Option Two? You can read this book…

Stephen: “On Jan. 17 George Siemens and I will launch the third offering of our online course called ‘Connectivism and Connective Knowledge’ – or CCK11. We use the term ‘connectivism’ to describe a network-based pedagogy. The course itself uses connectivist principles and is therefore an instantiation of the philosophy of teaching and learning we both espouse.” This book is the result of my participation in the #CCK11 course… 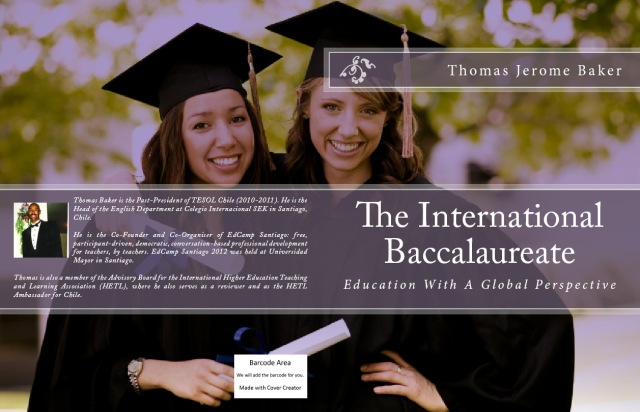 It is my hope that the present day search for global education, equitable and providing equality of opportunity for all, shall not cease until the “gold” we seek, has been found.

I therefore dedicate this book to all the educators, researchers, parents and students the world over, who strive to achieve this elusive goal,high-quality education for all the citizens of the world.

In this endeavour, it is my belief that the International Baccalaureate merits a closer look, based on their more than 40 year history of delivering consistently excellent results.

I add that all of the reflections and views in this book are mine alone, unless otherwise noted, and can not be attributed to my employer or any other organization I am affiliated with, past or present. For any errors or oversights, I bear the complete responsibility. 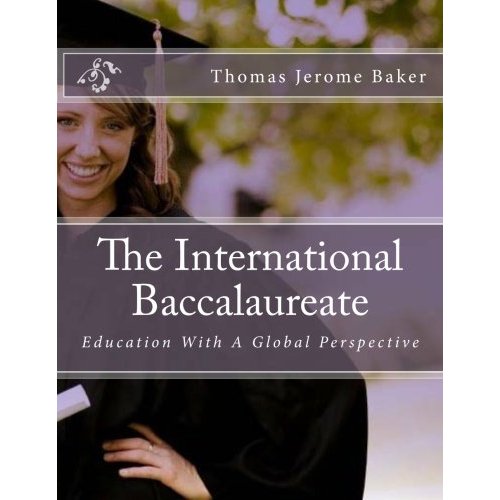 Thomas Baker is the Past-President of TESOL Chile (2010-2011). He is the Head of the English Department at Colegio Internacional SEK in Santiago, Chile.

He is the Co-Founder and Co-Organiser of EdCamp Santiago, free, participant-driven, democratic, conversation based professional development for teachers, by teachers. EdCamp Santiago 2012 was held at Universidad Mayor in Santiago.

Thomas is also a member of the Advisory Board for the International Higher Education Teaching and Learning Association (HETL), where he also serves as a reviewer and as the HETL Ambassador for Chile.

The source and inspiration for his writing comes from his family, his wife Gabriela, and his son, Thomas Jerome Baker, Jr.