Boudicca: Her Story (A Woman’s Book Every Man Should Read) 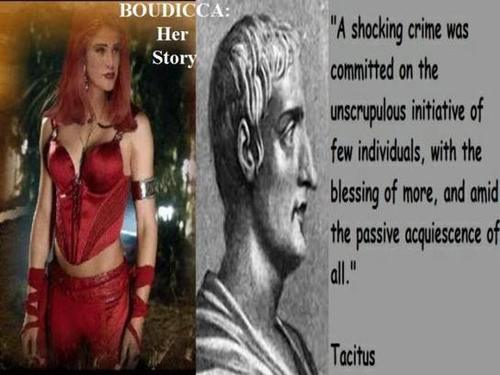 No, that’s not quite true. To be more precise, Boudicca was running a country full of wild Celtics, pre-historic Britons in a land invaded and ruled by an equally bloodthirsty lot: the Romans.

Yes, this woman was no ordinary woman. To call her extraordinary would be to do her a disservice, to be unjust to who she was, and what she dealt with.

She dealt with Romans who saw her country and her people as being inferior to the mighty Roman empire, with its vaunted military and legions of superbly trained and equipped soldiers.

Yes, the Romans were the world’s most renowned fighting force, and a few savages on an island like England could never rise up and take up arms against them.

That is, until one day, somebody pissed Boudicca off, and caused her to open the very gates of Hell loose upon the Romans. As the Roman historian Tacitus would later write: “A shocking crime was committed on the unscrupulous initiative of a few individuals, with the blessing of more, and amid the passive acquiescence of all.”

Now Tacitus was a very eloquent writer, but let’s break that down into modern English. Let’s translate. Here’s what Tacitus means: Somebody got some Roman soldiers to do something really terrible to Queen Boudicca.

A lot of people knew it was wrong and should have stopped it, but everybody just stood by and let it happen.

A few people even got some physical enjoyment out of it. When it was over, Boudicca had but one purpose left in her life.

She was going to make every Roman on the island of England pay dearly for what they had done to her, and to her family.

Now, if you are a man, here’s how you should be reading this: Every woman has a bit of Boudicca inside of her. All you have to do is press the wrong buttons, and you will find the gates of hell unleashed upon you, just as the Romans did. They had no one to blame but themselves…
**

Book Description
Publication Date: February 18, 2012
What is deemed as “his-story” is often determined by those who survived to write it. In other words, history is written by the victors. The Roman historian, Tacitus, left us an account of the Roman victory over Queen Boudicca in the year A.D. 60-61.

Yet undeniably, every community has a memory of itself. Not a history, nor an archive, nor an authoritative record, but a living memory, an awareness of a collective identity woven of a thousand stories.

Now, with the help of the Roman historian Tacitus, I shall tell you Queen Boudicca’s story, her-story……

Thomas Baker is the Past-President of TESOL Chile (2010-2011). He enjoys writing about a wide variety of topics. The source and inspiration for his writing comes from his family.
View all posts by profesorbaker →
This entry was posted in Culture, Education, Reading, Writing and tagged A Woman's Book Every Man Should Read, books, Boudicca, Boudicca: Her Story, crime, criminal, despicable, fiction, historical, history, horrible, human-rights, literature, military, payback, politics, religion, revenge, Rome, Tacitus, terrible, vengeance. Bookmark the permalink.