#LoveLetters of Henry The Eighth, #King Of #England: A Linguistic Analysis

“My heart and I surrender ourselves”…King Henry The Eighth’s words to Anne Boleyn…A declaration of love…A dream come true…A king’s love…What woman hasn’t dreamed of such a thing as this?

Who is Anne Boleyn?

Historians tell us: “It is because she is what she was, and did what she did, that England is what England is today… We may take it that round about the year 1525 this young woman was something between twenty and twenty-three years of age and had thoroughly captured the King…

Her sister Mary Boleyn had already been the mistress of Henry The Eighth in very early youth, and he had got rid of Mary by marrying her off to one of his gentlemen. ” – Hilaire Belloc (Characters of the Reformation)

What can we learn about King Henry The Eighth by reading his letters to Anne Boleyn?

He is a man in a hurry, who knows how to wait for what he wants.

Henry the Eighth is an enigma, a contradiction in terms.

How does he use words?

He chooses his words carefully, saying much in few words. He prefers the little words, rarely using big words. Linguistic analysis confirms this and much more.

Who was Anne Boleyn?

Some say she is a saint.  Many people would agree she died an unjust death, showing faith in God that would reap heavenly rewards.

Some say she is a sinner. She captivated another woman’s husband and made him her own. Surely that would condemn her to burn in the eternal flames of damnation.

Still others say she is a sorceress. She was described by people close to her as having six (6) fingers. That would seem to confirm her supernatural effect on King Henry The Eighth.

Henry fought with the Pope and broke with the Catholic Church all because the Pope would not grant him a divorce so he could marry Anne Boleyn.

Saint, sinner, or sorceress? Maybe a bit of all three.

Linguistic analysis, however, has the last word on her most famous letter, written while she was a prisoner in the Tower of London. Is it a fake, or is it real? Read this fascinating book to find out! 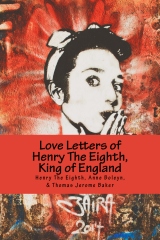