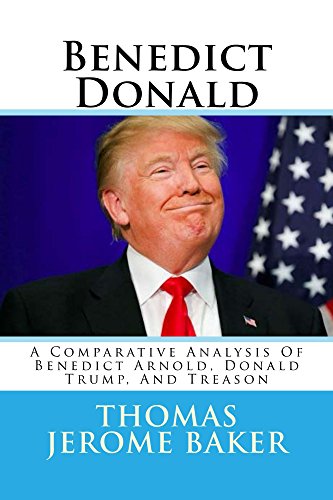 With the election of Donald Trump as the 45th President of the USA, America once again is forced to realize that the real threat to its liberties has always come, not from its foreign enemies, but from its enemies within.

As the case for President Trump’s treason and impeachment is laid before the American public daily, the time has come to re-examine the treason of Benedict Arnold (Patriot-turned-Traitor), by using a comparative analysis with Donald Trump.

Is President Trump a traitor on the same scale as Richard Nixon, Benedict Arnold, or worse???

Should President Donald Trump be impeached???  Should he resign???

At the very least, we must ask ourselves: Is Trump a Benedict Arnold? Benedict Donald? The answer is complex, controversial, and contradictory. It is a Shakespearean tragedy of epic proportions. The names change, the times change, but treason remains the same dark, despicable crime.

This book is written eloquently and with passion and without prejudice. It is a true page-turner you will definitely read in one sitting. I made so many highlights and notes while reading, thinking that I might post a few quotes in this review. But the passages are too truthful and too shocking to be taken out of context. They may be difficult for some people to understand without reading all the supporting text. I truly wish everyone could read this book. I actually learned a lot about Nixon and Arnold. The author makes a compelling case, acknowledging the reality of the true-life horror story we are living in today.

I will indulge myself by pasting one quote here:

“Whether we get the bad news today, or tomorrow, or next year, or in a hundred years, the future will bring a revelation about Donald Trump that will justify our worst fears about him.”

A solid 5 stars for Benedict Donald: A Comparative Analysis Of Benedict Arnold, Donald Trump, And Treason.