Posted on February 21, 2019 by profesorbaker 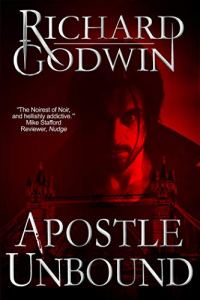 Welcome to The Theatre Of Dreams.

★★★★★ Apostle Unbound, by Richard Godwin, is a gripping crime suspense thriller, exactly as the book’s subtitle proclaims it to be. I am in full agreement with that. I would also accept the book in the occult suspense genre. I also think that “Theatre Of Dreams” would have made a fitting subtitle had it been chosen as such.

The setting for this story is primarily in London. The plot takes you from London, to Mexico, and also to Las Vegas. A serial killer, Karl Black, has been captured and put behind bars. This serial killer, with a diabolical mind, has managed to influence the son (Elijah) of the policeman (Frank Castle) who captured him (Karl Black) to recreate the same horrendous crimes that Black did.

That accounts for the opening line: “The journey took Frank Castle back to the place of hidden identities, the father seeking a son he wished he didn’t have.” That sentiment holds up from first page to last, because Elijah is not the kind of son any decent man would ever be proud of.

So, why is Frank Castle looking for Elijah, his son? As I alreaady said, his son is a serial murderer, who is under the influence of another serial murderer. It is a clever plot, and if you’re like me, you are tempted to just turn to the last page and see how everything turns out in the end.

I didn’t do that. I recommend that you don’t do that either. Yes, the book is only 238 pages long, but I read all 238 pages in one sitting, about 2 hours reading time approximately. That said, this book presents the reader with a complex human drama that is evident in the first line of the book.

On each successive page, page after page, the tension mounts. Author Richard Godwin keeps you in suspense, gradually increasing the level of suspense by skillfully weaving in a large number of secondary characters and incidents.

This is not a distraction because it adds substance and background to the fundamental issue being dealt with: a policeman is hunting down his own criminal son. Everything else must contribute to developing and “fleshing out” that basic question which I now ask you: What would you do if Elijah (serial killer) were your son?

If crime fiction is your genre, and you enjoy fast-paced, high-suspense, with an unexpected twist for an ending, then this is your book. I want to add, finally, that given the kind of world we are living in nowadays, it isn’t even necessary to suspend disbelief. That is to say, the events in this book fit within the boundaries of the evening news on any given day.

I give this book 4 and a half stars out of 5 because, in my opinion, the story clearly demands that Mexico, at the latest, is the place for Frank Castle’s demise. Because it isn’t, a sequel, with a future confrontation of good versus evil, with Frank Castle as protagonist, is again necessary.

Besides Frank Castle, I identify one other character (Stone) with the strongest possible motivation to pursue Elijah into the bowels of the earth to bring him to justice. I feel like the author didn’t have the courage to eliminate Frank Castle, and thus leave any future confrontation with Elijah in the hands of another character. This is rare for me, but I freely admit that the only thing I didn’t like about this book was the ending.

The notorious serial killer resurfaces as the founder of a cult, with plans to remove politians in post-#Brexit Britan, & settle unfinished business with his mentor that compels the killer toward a dark and shocking ending.https://t.co/7MJsqYsJmh#CrimeFiction #Thriller #Books pic.twitter.com/c23VJoMWdS

He was born in London and lectured in English and American literature at the University of London. He also teaches creative writing at University and workshops. You can find out more about him at his website www.richardgodwin.net , where you can read a full list of his works, and where you can also read his Chin Wags At The Slaughterhouse, his highly popular and unusual interviews with other authors.

Thomas Baker is the Past-President of TESOL Chile (2010-2011). He enjoys writing about a wide variety of topics. The source and inspiration for his writing comes from his family.
View all posts by profesorbaker →
This entry was posted in Authors, book reviews and tagged crime fiction, drama, gripping, murder, police, serial killer, suspense, thriller. Bookmark the permalink.