The news is full of teachable moments. For teachers, every day and every story is a lesson you can use to teach your students something new about the world. For example; a conflict as old as the UN itself: Israel-Palestine.

My high school history teacher and Model UN advisor, Ms. Elowe, began each class with current events. We had newspapers on every desk and we were encouraged to follow the news at home. Students would take turns sharing different news articles, which was a good way to stay up-to-date on global affairs, as well as to practice public speaking. When a particularly important event took place, Ms. Elowe would use that event to prompt a classroom discussion or to give a presentation describing the background behind the event in detail.

Here are a few tips on bringing current events into the classroom:

For participants in Model UN, the big story this week is what’s happening at the real UN: Palestine has announced that it will apply for UN membership, and the United States has vowed to veto their application in order to support Israel.

For the international community, the Question of Palestine is an issue that the UN has discussed since its very beginnings, followed by several decades of conflict and peace negotiations between Palestine, Israel, and neighboring Arab states.

For teachers, this event is an opportunity to provide context for this current event by introducing the Israel-Palestine conflict and explaining how the United Nations works

I won’t try to explain the entire Israel-Palestine conflict – that will take a few days, both on this blog and in your classroom, and there are plenty of books and online resources on the subject. Let’s start with what’s been written in the news this week, and then provide context for different parts of the story.

The news articles above cover most of the 5 Ws – specifically who, what, where, and when – so let’s dig deeper into the why and the how.

Why is Palestine seeking UN membership, and why do Israel and the US oppose it?

Becoming a UN member state gives Palestine increased legitimacy, both in the UN, in the international community, and at the negotiating table with Israel.

The BBC provides a concise introduction to the topic in this  Q&A page:

“The Palestinians, as represented by the Palestinian Authority, have long sought to establish an independent, sovereign state in the West Bank, including East Jerusalem, and Gaza — occupied by Israel since the 1967 Six Day War. However, two decades of on-and-off peace talks have failed to produce a deal. The latest round of negotiations broke down one year ago.

Late last year, Palestinian officials began pursuing a new diplomatic strategy: asking individual countries to recognise an independent Palestinian state on the 1967 borders. Now they want the UN to admit them as a full member state.”

Palestinian statehood raises additional political and even legal issues for Israel. If Palestine were recognized as a UN member state, then Israel would not only be accused of occupying foreign territory, it would be accused of violating another country’s sovereignty.

Palestine’s timing also coincides with multiple revolutions taking place across the Middle East, or what the media has called “Arab Spring.” This timing puts the United States in an awkward position — on one hand, the US supports Arab Spring, but on the other, the US will veto Palestine’s UN membership in order to support all Israel.

Obama described his stance in his  speech to the UN General Assembly:

One year ago, I stood at this podium and I called for an independent Palestine. I believed then, and I believe now, that the Palestinian people deserve a state of their own. But what I also said is that a genuine peace can only be realized between the Israelis and the Palestinians themselves.

The articles above provide some background for Palestinian, Israeli, and American motivations, but tomorrow’s General Assembly speeches by Abbas and Netanyahu will provide more authoritative information (read: primary sources for your students to analyze).

I think the simplest way to understand what’s happening is to see the entire thing as a negotiation. Palestine is going to do something that Israel and the US do not want to happen. In order to dissuade Palestine, Israel and the US have to offer something. Whether or not Palestine receives UN membership status, they’ve already gotten something: leverage.

How does a country become a UN member state?

The UN Charter sets the process for membership under  Chapter II, Article 4:

“The admission of any such state to membership in the United Nations will be effected by a decision of the General Assembly upon the recommendation of the Security Council.”

The UN website goes into more detail, listing the 4 steps to  becoming a member:

Here are a few questions that you can use to evaluate their understanding (e.g. homework) or to prompt student discussion:

In this simulation, students will assume the roles of the 15 Security Council members, as well as Israel and Palestine. As delegates representing their respective countries, they will take turns giving speeches on whether or not they support Palestine becoming a UN member state, and why or why not. Afterwards, students can ask each other questions, and then they will vote on a draft resolution. 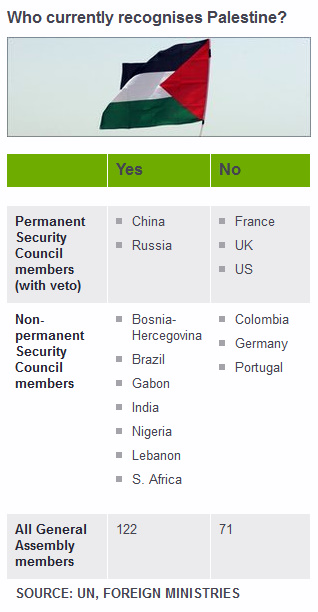 The expected result of the debate is that most of the Security Council will vote in favor of Palestine’s membership application — except the United States, who will exercise its veto power.

Your outcome may differ, but predicting the future is not the goal of this activity. Rather, this is an exercise intended as a fun way to foster an appreciation of current events and practice research and public speaking skills.

Thomas Baker is the Past-President of TESOL Chile (2010-2011). He enjoys writing about a wide variety of topics. The source and inspiration for his writing comes from his family.
View all posts by profesorbaker →
This entry was posted in Education, Politics, public speaking, Teaching Tips and tagged current-events, International Diplomacy, Israel, Model United Nations, Palestine, public speaking. Bookmark the permalink.